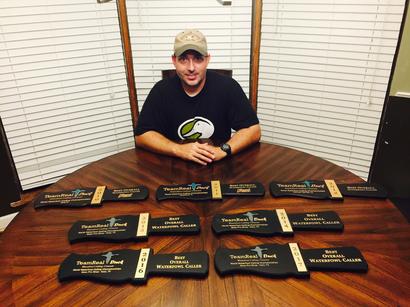 John A. Chiasson has won 53 waterfowl calling championships (22 world championships in single and teams) and placed in the top five 156 times in his 171 total contest career-so for. Meaning that he has won 31% of the contests he’s entered and placed 1-5 in 91.2% of them.

On July 9th 2017 in Katy, Texas  John won his 7th best overall championship. The best overall is based on an accumulation of points awarded for placing in the top 5 in duck events (mallard, pintail, widgeon, teal and wood duck) individual and teams and in goose events (speck and snow) individual and team. Guy with the most points is the best overall champion. Placing high or winning in both duck and goose calling events is necessary as is competing in multiple events. Not to mention the hours of practicing multiple species calling.

Hunt with only the best goose calls available on the market.

RedBone considers learning to run a speck, specklebelly, snow goose, blue goose, Ross goose, cackler goose and sandhill crane call as being the same as learning to play a musical instrument. Get a good instrument, get good instruction and practice. That is the idea behind RedBone.

Get Your Call Here

Keep missing out on these unique limited calls? Provide your name and email below to be the first to know when new calls are added to Nathan’s corner.

Made with by Web Rocket
Scroll to Top